Try a different kind of breakfast 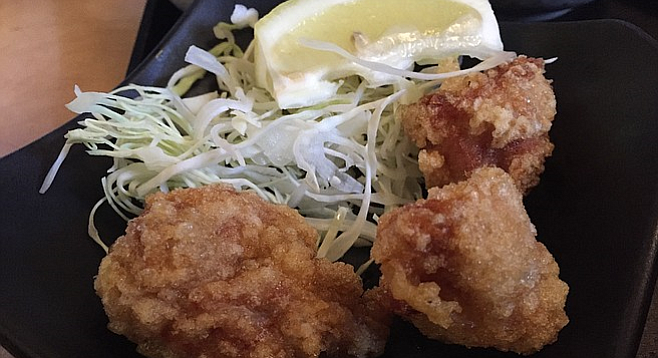 In the United States, the word “breakfast” conjures images of pancakes, bacon, and eggs. Because we’re right on the border, San Diegans might also think chilaquiles or huevos rancheros, which are just variations of an egg-centric meal. In Europe, things aren’t much different, though eggs are not front-and-center. Instead, you’ll see more cheese, croissants, yogurt, and fruit.

David, ready to eat breakfast in our room at Hakone Ginyu in Japan

Breakfast platter, with udon and beef

Shrimp tempura, with shumai in the background

To really step outside America’s breakfasting comfort zone, try giving the traditional Japanese breakfast a whirl. One place you can start is Hinotez.

Every day from 8 a.m. to 11 a.m. you can get a basic breakfast for $3, with additional items for $1 or $2, which you’ll need if you want to make a real meal out of it. The basic breakfast is composed of steamed rice, miso soup, yakko (cold tofu),tsukemono (Japanese pickles), and space for a “topping” (one of those additional items).

The last time David and I had a Japanese breakfast was at aryokan (a traditional Japanese inn) in the small Japanese mountain village of Hakone. To compare that meal to Hinotez’s offerings would be like comparing Addison to Denny’s. So set your baseline for “fast and cheap,” and you’ll be good to go.

To taste around the menu, we got a handful of toppings. David opted for the Mini Udon and Beef Plate, $2 each. The beef seasoning was good — the sauce was rich and on the sweet side — but the meat itself was too greasy and gristly for my taste. I ended up picking out some of the onions to add to my rice for some extra flavor.

The udon was satisfying, sort of a little meal in and of itself. The noodles were cooked well, not too soft or chewy, and the broth had substance, meaning a pleasant seasoning-to-water ratio, though we added both salt and shichimi (Japanese spice mixture) to kick it up a notch.

I got the spinach and tofu, shrimp tempura, and shumai. The shrimp tempura had a great crisp on it, and was one of the best things on the table. The tofu with spinach was surprisingly flavorful, with hints of onion and soy sauce. This is the stuff I ended up eating with my rice. The shumai was not to my liking. I prefer the big, chewy, simply shrimp versions at Jasmine or Emerald, whereas these had some other flavoring in them, perhaps ginger. I can’t quite remember, because after taking a bite I gave the rest to David.

We ended up adding the fried chicken to share. These fun bites were tasty enough, but the meat was darker I like.Izakaya Masa’s versions of karaage (Japanese fried chicken) remains my favorite.

The service was polite and fast, and the booths are deep and private, with hanging fabric (Japanese noren) serving as a sort of door to each one. I want to return for lunch and check out the ramen and yakitori, as those are the two things this place is most known for. Since Hinotez’s sister restaurant, Yakyudori, is currently home to my favorite bowl of ramen in San Diego (and it’s just down the road), I’m feeling like that will happen.