All about that shawarma 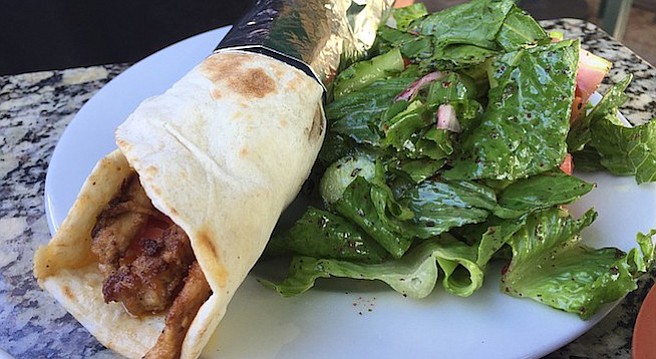 I’m not sure why I never made it into Aladdin before now. I walk by it at least once a week on my way to Trader Joe’s in Hillcrest, so it’s not like I didn’t know it existed. I just never felt compelled to try the Lebanese restaurant until now. Well, to be fair, I’d already tried the food, but only recently; I just hadn’t yet been to the restaurant. It was after sampling some of Aladdin’s dishes at a friend’s house that I realized what I’d been missing.

Aladdin at the HUB (aka RSC)

On a recent sunny afternoon, David and I pulled up a chair on the outside patio at Aladdin, where we could easily see the hubbub of the HUB (Hillcrest Uptown Block, which David and I will forever persist in calling the RSC: Ralph’s Shopping Center). The first thing we noticed upon looking at the menu was the lack of lunch specials. The second thing we noticed was the prices. “Jesus,” I said, “$24 for a chicken kebab? What the…? How many kebabs come on that plate?” It was decided that since we were already seated, we’d suck it up and go ahead with the meal.

We began with a side of tzatziki, the traditional Mediterranean condiment of yogurt, garlic, cucumber, and mint ($6.50 full, $4.50 half). As tzatzikis go, this one was ideal: the yogurt had a great texture — smooth and creamy, the cucumber was fresh and crunchy, the garlic was present but not overpowering, and there was just enough mint to add a hint of coolness. The dish came with plenty of pita bread, a flatter version than I’ve seen elsewhere, but just as tasty.

The salad that comes with Aladdin’s entrées

I went ahead and ordered the $24 chicken kebob entrée. A salad arrived first, and it was as huge as it was unremarkable. Aside from a few hunks of tomato and strips of onion, it was pretty much just greens drenched in a slightly bitter, but mostly bland vinaigrette. I had a bite and pushed it aside.

When my entrée arrived, I finally understood the pricing. This was not a plate, it was a platter. And a beautiful one at that. There was a rainbow of colors: the red of sliced tomatoes, green and purple-herb-topped basmati rice, orange-tinted charbroiled chicken breast, a pool of yellow olive oil in the middle of a mountain of hummus, and the snowy white garlic and lemon “sauce” that was more the texture of mashed potatoes. It tasted as good as it looked — the tomatoes were ripe, the hummus was flavorful enough to eat on its own and, though my chicken was on the dry side, the seasoning made it plenty flavorful.

Taking home the rest of that chicken kebob plate

It could easily have fed two people, which made a lot more sense, pricewise. Considering I brought more than half of it home for a second meal and a snack, in retrospect it was a fair deal.

David ended up ordering what I really wanted, and what ended up being a much more reasonable choice for lunch: the Chicken Shawerma Wrap (spelled shawerma on the menu), which comes with either a side salad, lentil soup, rice, or French fries ($9.95). Here was the tasty meat I remembered from my friend’s party. Thin strips of marinated chicken slathered in a lemon-garlic sauce and shoved into a pita with ripe tomato. It was so simple, but so satisfying. David offered me a bite, and I took three. I ended up trading some of my chicken for his.

I’m glad I got to try the giant kebob plate (and continue enjoying it the next day), but I realize now that those entrées are best shared over dinner. For example, with a party of four, I’d get an app or two, and then share two entrées. But for lunch — and I do want to get back to Aladdin for lunch again very soon — I’m all about that shawarma.